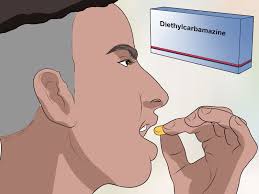 "Im happy these drugs are being distributed in my hometown. No one deserves to suffer what I have suffered," says Feisal Alhassan, a native of Minna, Niger State, who suffered from the debilitating disease for 14 years. "Even though I was told LF has no cure, it’s good to know one can at least prevent its progress if these drugs are taken early”, he says. “I have also been told that for those like me who already have LF, taking these drugs will help prevent transmission of the disease to others”, he added.

The disease leads to a complication of swollen legs with rough thickened skin, also known as ‘elephantiasis’ and can occur in other parts of the body including the scrotum (in men). LF is caused when filarial parasites transmitted to humans through bites from infected mosquitoes lodge in the lymphatic system and grows into adult worms over several years. They then produce more filarial parasites before dying in another 4-7 years. Filarial infection is usually acquired in childhood and has no gender preference.

As of 2017, Nigeria accounted for 14.3% of the global population of people that required LF treatment as an estimated total of 128,342,058 people in 583 out of 774 LGAs required preventive chemotherapy for LF. In 2018, 79,831,396 people had been reached with treatment for LF at least once. LF treatment is supposed to be taken once yearly for five years. (Source: WHO Preventive Chemotherapy Data Portal 2017).

“Though a neglected disease, LF is still very infectious and can be transmitted through something as small as a mosquito bite. We need to create more awareness about its dangers and distribute as many preventive drugs as possible”, says Dr Anyaike Chukwuma, the National Neglected Tropical Disease (NTD) coordinator.

“We are grateful that the WHO/Expanded Special Project for Elimination of Neglected Tropical (ESPEN) has been at the forefront in the fight against LF and call on other development partners and well-wishers to support us to sustain our efforts,” he adds.

According to Dr Suleiman Aliyu, the WHO focal person for NTDs, “WHO has continued to ensure that the gap in geographic coverage for LF comes to zero by 2019. At present, only 33 of the 583 endemic LGAs are yet to start mass drug administration”.

Additionally, “WHO has worked relentlessly through the affected State Ministries of Health to ensure LF becomes history. Furthermore, thirty formerly endemic LGAs are no longer endemic to LF and hopefully many more LGAs will be added to the list this year. It is however, a capital-intensive project and thus more support is needed to ensure the intervention goes on. WHO is, despite all odds, continuing to assist the Nigerian Government to create more awareness about LF and distribute more medication to help in the country’s ongoing fight against LF,” Dr Aliyu said.

Morbidity management and disability prevention for patients with swollen legs and scrotum is also being supported by WHO and implementing partners. Support for LF control in Nigeria is being made possible by assistance from the Arab Bank for Economic Development in Africa, Bill &Melinda Gates Foundation, Christoffel-blindenmission, Department for International Development (DFID) United Kingdom, GlaxosmithKline, Johnson & Johnson, Kuwait Fund for Arab Economic Development, Mectizan Donation Program. Others include Merc Sharp & Dohme Chibret, Sight-savers, The END Fund, Merck Group, United States Agency for International Development (USAID), The World Bank and the Expanded Special Project for the Elimination of NTDs WHO/ESPEN.